Just after I decided to exit my previous company and launch a new one, I was invited to participate in a global campaign for Google for Entrepreneurs that involved being on a Google Hangout that might potentially be seen by thousands of viewers around the world. This was exciting and a big honor… and a logistical problem.

After all, I was just about to close out my company’s downtown offices and consolidate what was left into my home office.

I should back up a step. Somewhere I probably have pictures of what it looked like when we — my late husband and I — first bought the house. Ah yes, here’s one: 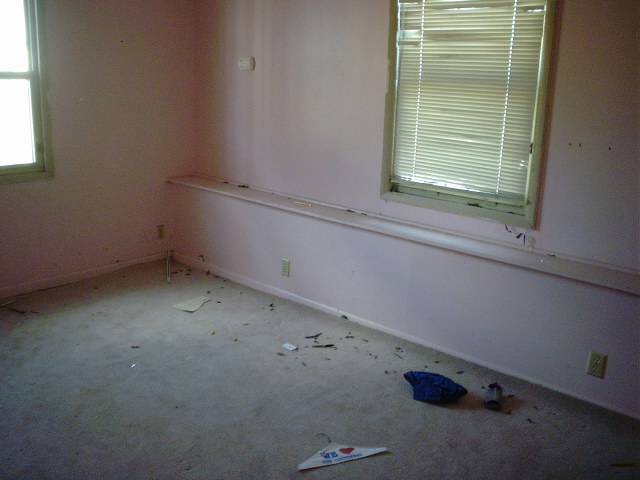 That window is, indeed, broken, and there is a charming amount of debris on the floor. And those walls? Dirty pink. Did you even know dirty pink was a paint color? I didn’t.

But we made the best of it for years, though, because you see, the thing was, the plan was always to do a major renovation to the house. This house, I should mention, is somewhere between 150 and 180 years old. And the part of the house where this room is, which is a 30-year-old addition done very badly and cheaply, would be demolished in the process to make room for a much better, more cohesive, and larger addition.

But that was in 2005, and we spent the better part of four years fixing up the exterior of the house. I’m not kidding; check it out:

It was grueling, detailed work. And even though we did earn a historic preservation award in the process, we needed a break, and it seemed the interiors could wait until we got to the big renovation.

But then I started my business, and that took up a lot of my time and our personal resources to float us financially until the business became profitable. And then the Nashville Flood of 2010 happened, and my husband’s basement art studio was destroyed and had to be rebuilt. And then… and then… it was always one thing after another.

And then my husband died. And as you might imagine, for a good while, I had other things on my mind.

And then, even after I was recovering from that loss, even after I met someone, and even after he moved in, I still held out the idea of demolishing the old office in a new build-out.

But when I closed my business and started a new one, when I moved my offices and consolidated into my home office, and when the Google Hangout invitation came in, it was time to do something, even if it was only a temporary fix on a room that would ultimately be demolished.

So I began to cover the pink with gray.

This room had always been shared with my five cats. They were not excited when I locked them out for a few days so they wouldn’t get any Pepe LePew-style stripes.

The room has pretty high ceilings, so getting up on a ladder and leaning around all day was part of the equation. Luckily, there was beer to reward myself afterwards.

And here’s a view of the finished product. In the background you can see the cat loft that my late husband built. As I said, this room has always been shared with the cats, and it was important to me to preserve their leisure area to ensure that we all coexist happily. They’re a calming force to have around when you’re working, so having them climb up and down the steps throughout the day, looking out the window at birds and squirrels, is one of the nice perks of working out of a home office, and reminds me to connect with the outside world and the things that matter.

And the view of it (and me) during the Hangout (at least as it appeared, backwards, on my screen): 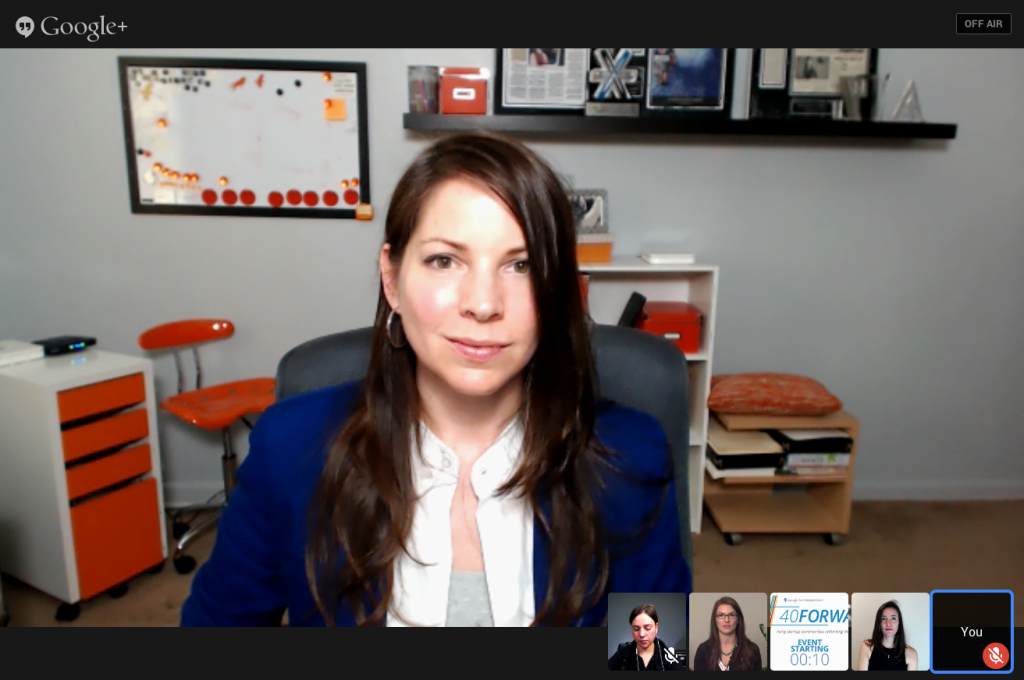 So let’s see that before and after again:

3 thoughts on “Home office revamp for Google for Entrepreneurs Hangout”