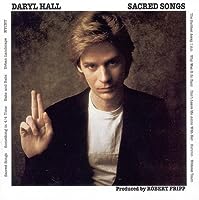 Never seen h monthly before, but they came up on a Google News alert for Daryl Hall (yes, I do care that much, shut up) and had a well-written quick review of Hall’s Sacred Songs album:

So, in perhaps one of the most befuddling pairings of all time, Hall teamed up with King Crimson’s prog-rock progenitor, Robert Fripp, for his debut solo album, Sacred Songs.

The results of this unlikely pairing are strangely brilliant. Hall’s soaring vocal delivery is complimented by Fripp’s maniacal guitar work and layered production, and Fripp’s experimental touches offer some intriguing soundscapes that leave you to ponder what Hall and Oates would have sounded like if Fripp was in the group.

Oh, and we can’t forget the glam-punk songs […] that could have endeared Hall to the 70’s punk scene if the album had been released in 1977 (when it was recorded), instead of 1980 (RCA apparently didn’t know what to do with it and shelved it for three years).

It’s such a cool alternate reality to imagine.

One thought on “Before Ghetto Smile, Frippertronics”