There’s a lot of mysticism about the number three and its special role in the universe. Some say it’s the strongest number, because the triangle is the most stable physical shape.

That makes a strange sort of sense to me today. Today is, after all, the third anniversary of the day I woke up and found out that my life had changed forever. The day that Karsten died.

And because of how incredibly badly it hurt and how incredibly hard it was to breathe and to merely go on, it was also the day I learned I could be stronger than I ever thought possible. Because I did breathe, and I did go on. I miss him, and I’ve missed him every day in ways sometimes trivial, sometimes sweet, sometimes disruptive, and sometimes overwhelming. And although the mix of those may change, I don’t imagine that will ever stop completely. But I’m also adapting to and growing into this portion of my life that he’s not actively part of.

I’ve tried to evaluate each of the years in progression, but it’s odd — they don’t break down well that way. They break down more in six-month stages, which is awkward because the opposite side of six months on the calendar from this date is Christmas. But so it is. For the past few years, the way I’ve been experiencing time is by alternately charging forward with all my steam and stamina and then abruptly slowing to a tip-toe around an increasing number of minefields where significant dates and triggers are buried. Buried but not hidden; for the most part, I know exactly where they are. Which is at least something to be grateful for.

But still, there’ve been defining milestones.

Between the first anniversary and the second anniversary, I closed a business and started a new one.

Between the second anniversary and this third one, I wrote a book about grief and recovery.

I look ahead of me to next year and wonder what milestone I’ll be able to point to. I’d say “I’ve made good progress” but every time I think I’ve made good progress, I find six months later that I’ve made more progress that shows me how much work I was still doing six months prior. So I know I’m still working to make myself as whole a person as I can be, and living as fully as I can.

I’ve spoken publicly about it. Been interviewed and profiled in the Tennessean about it.

I’ve talked about it in front of groups.

I’ve been writing answers to questions about grief on Quora. Hoping my experience can help other people.

And there’s lighthearted stuff, too. I learned about an app called NailSnaps while I was at a conference in Charleston last week, because one of the other speakers was wearing images of her own sketch notes on her fingers. 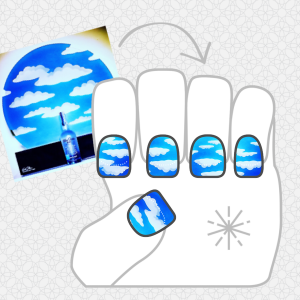 After I downloaded the app and was playing around with it, I was looking through old Instagram photos for ideas about what I could hypothetically make a test wrap design out of, and came across a photo of the “Beautiful Day” lighted acrylic sculpture Karsten always said he made in honor of our relationship. So I created the design, and was so in love with it I ordered a set of nail wraps. I’d include a picture of them on my own fingers, but USPS tells me they’re not going to get here until tomorrow. Oh well.

Perhaps this is, shall we say, an unconventional way to commemorate him, but he was an unconventional guy. We had an art show memorial for him, after all, where people were encouraged to wear electric blue and Bulleit bourbon flowed freely.

I know some people may have thought the memorial inappropriate, and some may find my stubborn insistence on joy inappropriate, but there’s never been any contradiction to me about being able to laugh through grief. Grief gets its way, one way or the other. You should get to have yours, some, too.

I think I’ve exorcised a lot of the demons of grief by writing so much about it and trying to create something true that could help other people know they’re not alone, and what I’m left with on the other side of that is mostly gratitude and peace.

Of course I had gratitude on day one, but I had the grief demons pretty good, too.

The gratitude I have now is wide and deep. I’m grateful for so many things. Like I have been since day one, I’m grateful for having had the loving relationship with Karsten that I had. To have loved someone so thoroughly and well somehow, perhaps counterintuitively, makes it easier to feel that I could let him go when I realized I had to.

I’m grateful, as ever, to my dear friends who showed up. I still, after three years, don’t know how people just showed up and started taking care of things. I still don’t know if I’ve ever done that for anyone else.

And oh, I can’t express how grateful I am to my fiancé, Robbie. That man has such a good heart and a willing spirit and an open mind.

The thing is, I genuinely don’t know what it would be like to get interested in someone, go on a few dates, and then discover that you were getting yourself into a relationship with someone who had just traumatically lost what she very publicly described as the love of her life. I don’t know how you find yourself there, and think, “OK. Let’s see where this goes.”

I know now that it’s premature and presumptuous to think there is one great love in your life.

What I’m most grateful about is to find out I was wrong about that.

Karsten taught me so much. I think I learned to love deeply and be loved deeply better from him than I could have learned it from anyone. I was only 23 when we got together; he was 37. I was always very ahead of my years, but so was he. He had a decade and a half of life experience and wisdom on me. We invested deeply in each other, and felt the returns in abounding love and trust every day.

And now, three years after losing him, three years through grief, three years into rebuilding myself, I’m certainly not always strong like the number three, but I am strengthened by that daily practice of love which I carry forward into my relationship with Robbie, my own resilience and survival, and the promising glow of my life that lies ahead of me, rich with love and gratitude and appreciation for every big and little thing.

One thought on “Three Years”