My friend and neighbor Kidd wrote an article about not having kids (I feel like that deserves a “no kidding!” but you and I both deserve better than that) for 12th & Broad‘s print magazine, and he interviewed me in the process. One quote made it to the article, but since I wrote so much more, I thought I’d share my answers here. 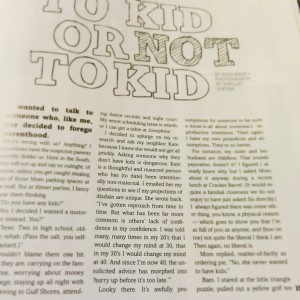 Kidd: Was not having a children a conscious decision, or did it just sort-of happen, or was there a reason beyond your control?

Kate: I never had any desire to have kids. I have intense compassion for people and for animals, and a tendency to nurture the people I love, but babies never excited any extra-special maternal reaction in me like they seemed to for many of my friends. And at some point in early adulthood, I realized that we were already an overpopulated planet, and there were already enough unwanted and uncared-for babies and children in the world, so I felt like you should really want to have kids if you’re going to have them. And for whatever reason, I just don’t have that drive.

Kidd: Do you like kids, prefer they all be drowned except for the two or three you know personally and love, or just feel generally ambivalent about them?

Kate: I feel about kids the way I feel about people in general: I can find something to like or even love about most of them, although some try my patience. I figure in some ways kids are not fully developed as the people they’re going to become, and in some ways they’re exaggerated versions of the people they’re going to become, and both of those possibilities make them potentially interesting and fun to interact with.

Also, I do sort of feel like the whole “it takes a village” thing is broadly true, and I feel like not having kids allows me to play a small supporting role in many kids’ lives. And in some cases all I mean by that is something as simple as smiling and waving at kids in stores and restaurants just to see them smile. Because I think contributing to an environment where kids are encouraged to be joyful might sometimes be easier for people who aren’t exhausted by the occasional tedium and chaos of raising them.

Kidd: Has someone ever made you feel like you’re weird or selfish or somehow not put together right because you’ve made a decision not to have kids? (That’s assuming you decided.)

Kidd: Again, assuming you decided not to have kids, do you ever have a moment of, “Uh-oh, when I get to be 70 this is going to suck”? Second thoughts?

Kate: On the contrary, the way I imagine myself at 70, and I certainly hope that I am able-bodied and quick-witted, is simply an older version of myself today. In other words, kids just aren’t in that scene.

Well, except for the fact that I’m engaged to a man who has teenaged and adult kids. So in all likelihood, we’ll have kids around us from time to time as we get older. But not in a way that is likely to significantly shape our lives.

Kidd: If you decided not to have kids, what were your principal reasons?

Kate: Like I wrote above, it was just never part of my future imaginings as a kid or ever. I could picture myself married, maybe; I could definitely picture myself in relationships. I could definitely picture myself becoming a successful professional. And as I got older, I realized I could see myself having friends with kids, and enjoying that. And if I worked really hard at it, I could imagine what it would be like to have kids of my own, and it felt really foreign and, I don’t know, unnecessary.

Sort of like how I feel as a satisfied iPhone user admiring a cool new Android phone, I guess. It seems like a nice enough phone and it can be delightful and charming to listen to my friends gush with zealous enthusiasm about them, but then they hand them to me. And they just feel clunky when I hold them and I don’t really know how to interact with them. And then they make a noise and I hand them back quickly. I’m happiest just admiring them from right over here.

On not having kids

2 thoughts on “On not having kids”